Polish Journal of Social Rehabilitation (PJSR) is published since 2010. The Journal was created and aimed primarily at people entering the world of humanities and social sciences as post-graduate students or as academics. The intention behind the Journal’s presence on the scientific landscape is to open up the achievements of Polish thought in social rehabilitation theory and practice to the national and international community and to various scientific and academic forums.

Over the period 2010-2015 Pedagogium - Warsaw School of Education and Social Sciences was the publisher of the Journal. Since 2016 Pedagogium Foundation and since 2017 Pedagogium Foundation along with Faculty of Educational Studies of Adam Mickiewicz University in Poznań plays this role. PJSR was published annually from 2010 – 2013 and has been a biannual publication since then. From the very first the Journal has the patronage of the Committee on Pedagogical Sciences of the Polish Academy of Sciences’ Social Rehabilitation Unit.

The broad internationalization of the Polish Journal of Social Rehabilitation was made possible thanks to funding from the Minister of Science and Higher Education, which the Journal receives continuously since 2014.

In accordance with the Polish Ministry of Science and Higher Education communication of the 30 July 2018 concerning the listing of scientific journals and the number of points awarded for being published in these journals, the Polish Journal of Social Rehabilitation was declared a 70 point journal.

Since 2016, the Polish Journal of Social Rehabilitation has been kept in an open electronic journal management system Open Journal Systems. 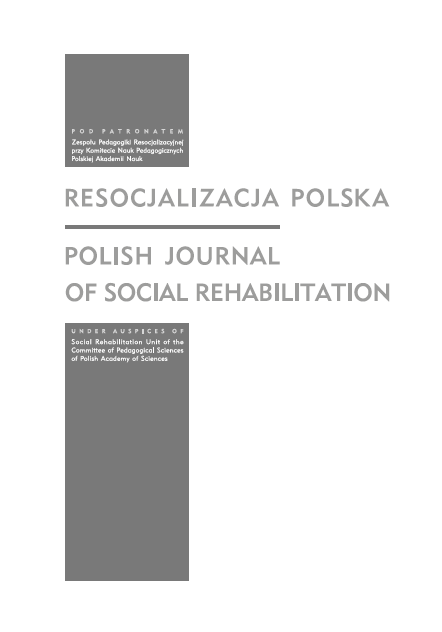 "Continuation of the bilingual natureof the journal and maintenance of the existing and introduction of new technologiesin order to increase its visibility and ensure open access to the journal onthe Internet - a task financed under agreement no. 905/P-DUN/2019 from thefunds of the Minister of Science and Higher Education allocated to activitiespromoting science"